The Tuatha Dé Danann (too-AH-ha day dah-NAHN; meaning "people of the goddess Danu") consider themselves the leaders of the Realm, for they are descendants of great heroes. They are the defenders of the woods, and the keepers of its deepest secrets.

Their skills of camouflage, ambushes and sneaking are legendary thus making their enemies think twice before entering the darkness of Tuathan woods. [citation needed]

Tuathan archers camouflaging for an ambush

The Tuatha Dé Danann are a tall and proud people, with strong square shoulders and noble features. Their most prominent feature are crown-like horns that protrude from their foreheads in varying designs and shapes; said to be derived from old family lines. They possess manes of usually coarse hair in shades of auburn to light brown in color. [citation needed]

A Tuatha's power often waxes and wanes depending to the season that they’re attuned to, and they may be stronger or weaker, more or less easily harmed at various times of the year. They refuse to use fire due to its chaotic and destructive properties, anathema to the forests they have sworn to protect. [citation needed] 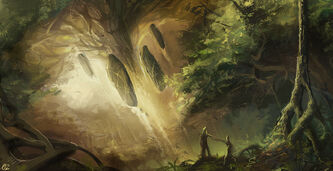