St'rm are the most enigmatic people of all of the races throughout the Realms. Scholars only have conjectures about their origins and their motivations, and the St'rm prefer it that way. Some are even connecting them with the Dragons, but these are shrouded with even more mystery.

The St’rm are elegant and graceful, and very proud of the power that lies in their rhythmic movements. To the St’rm, to battle is to dance, and their graceful steps are a form of magic themselves.

St'rm are heavily matriarchal in both government and dominance of form although all members of their race have a very refined grace, and are among the world's most prolific dancers. They are also known for their strong bonds, acting with respect even to their enemies. 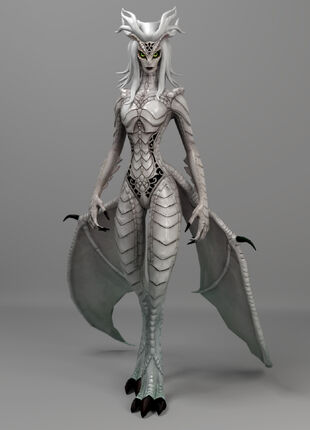 Speculated connections with the Dragons could link St'rm to the very creation of the world as we know it today. We can only hope that, someday, a veil of secrets will be lifted.

The St'rm appear as lean reptilian humanoids. Embraced in a layer of pale scale plating throughout their entire body, with intricate designs of darker scale usually on the face, back, and along the belly. They have ridges around the sides of the head with wild growths of rigid wispy hair. Their hands are clawed with thin needle-like talons, while their leg end with wide digitigrade feet with thicker talons. They have vestigial tails, along with a pair of wings that come out the small of their backs; though, those might be more ornamental than functional, helping to add to their unearthly grace.