A large and imposing people infused with ice, the blue-skinned Jötnar (singluar Jötunn) are known as Frost Giants. As they age they literally get bigger, stronger and tougher and even more frightening to behold on the battlefield. The Jötnar are not unthinking brutes however, for not all stories and legends are true, even here among the Changed. 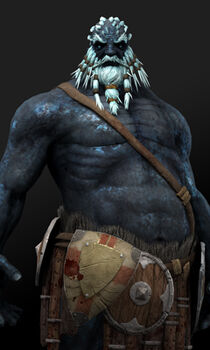 Belt made of "little" shields...

The existence of the Frost Giants is one born of pain, fear, and darkness. The Jötnar do not feel the cold, and their great size and strength is a testament to the story of their ancestors: a story of great hardship among stone, ice, and snow. Their hardiness and the hardiness of their ancestors leaves them deserving of the title "Winter's Children".

In the small Viking village of Út, high atop cold and snowy mountain peaks in the middle of winter, people began disappearing - wandering into the white desert never to return. The villagers called it frost-madness - a by-product of the Piercing that caused the cold to numb not only the body, but the mind. Any attempts they made to track down the missing people quickly proved futile in the harsh alpine environment.

After the cold claimed three more victims - all children - at once, local warrior-hero Thrud dared to set out alone in search for them. When he failed to return, his younger brother - a master of runes and stories, Gest - was filled with worry, and ventured out into the mountains as well. As night approached and the telling dark clouds of a Veilstorm appeared in the sky, Gest happened upon the remnants of his brother's spear near a crevice on the underside of a huge boulder. With the imminent storm giving him little choice but to enter, he advanced into the darkness with sword in hand.

Deep inside the boulder, Gest found himself in a barely-sunlit and icy cave, where the missing children were being held, freezing and miserable, inside makeshift prisons of ice and stone. Across the room and bound to the wall by chains and ice, Thrud was alive, but missing a foot and his sword-arm; his flesh-stripped bones lay on a bloodstained table in the middle of the room. Despite Thrud's pleads for Gest to escape, their captor - a bearlike madman and apparent cannibal - appeared and introduced himself as the Beast. Gest was easily disarmed and toppled by the Beast's immense physical prowess, but was given the chance to gamble for everyone's freedom in a game of riddles imposed by the Beast.

As their battle of wits raged on, so too did the Veilstorm outside, growing stronger until it lashed at the boulder with the strength of a full-blown Malevolence. Never having intended to let Gest go, the Beast posed one final question to him over the din of the storm. The storyteller hesitated for too long, and the Beast's teeth ripped at Gest's throat, the violence punctuated by the storm cleaving the boulder open with a deafening crash. One of the children who had been captured, a boy, wishing wholeheartedly for the strength of the ancient Jötnar from Gest's stories, became changed by the storm's fury, and so too did the other children. They had become Giants, cold and strong, much bigger than the Beast, and broke out of their prisons as they grew. Together and towering over their former captor, they tore the Beast limb from limb amidst the unrelenting blizzard.

When the storm subsided, the cave lay collapsed and flooded with stone and snow. The two brothers, now dead, were buried deep beneath the snow and debris. Upon returning to Út, the children found that those who had survived had been changed in the same way. Together, the survivors repaired the damage to the deceased brothers' mead-hall. The boy took the name of Mimir, and wrote the story of the two brothers; living in the mead-hall, he would sing it for generations to come.

From the ruins the giants built anew, erecting great houses and a mighty wall around their village, which then became known as Útgard. They called that winter the Fimbulwinter, and it lasted the length of three winters in a row.

The Jötunn appear as rotund and muscular humanoids of massive size, towering over most humans. They have grim faces with wide noses, highlighted by blackened eyes with brightly colored irises of blue or violet. Their skins are splotchy shades of deep blue, in contrast to their stark white hair easily identifies them for what they are. They also possess several bone growths out of their back to help stabilize their frames of the large size. Jötunn are known to get even bigger as they age.