The Gargoyles (GAR-goils) are stone sentries and watchers from walls, now come to life. They wander the Realms, seeking some unknown truth of the shattered world. While restless, they are known to be passionate and skilled musicians. Seeking to master the very element whose dissonance has the power to sunder their hardened stone exteriors, they serve Arthur, in the hope that his leadership can bring true harmony to the Realms.

While the Gargoyles themselves were created from Goji and his band of musicians, the true father of the Gargoyle race could be considered to be Romain. A man that gave his life & blood in service to his community and to protect the children that he loved. A deeply musical race, their very name comes from the sounds they made during the storms when they were little more than statues. Their songs might be capable of holding back the full power of the storm for a time.

The Gargoyle Becoming, like that of many of the other races, is filled with sadness, hubris, and a touch of bravery. The Gargoyle did not begin as statues given human form by the Veilstorms, but quite the opposite: as humans turned stone, then given life once more. The main character of the story is Goji. Goji had an uncommon affinity for music. At the age of five, he was given a tiny lute, which he soon learned with master with a dedication that was close to obsession.

His commitment to all things sound began to draw in other like minded individuals, from which Goji choose the best and most dedicated. As with many extraordinary individuals, as his ability and fame grew, so did his hubris. Goji and his band of musicians eschewed all other childish things, their hearts growing cold like the stone of the cathedral in which they practiced their craft.

In their foolishness during the First Breaking of the World, when the sky rained fire, they refused to hide, believing that nothing could conquer their music. As the storm began to pound the cathedral, the group began to cling to the walls, and the storm and magic lashed them to and fro. The evil intelligence of the storm, sensing the prideful band, caused the stone of the walls to flow and ooze onto the group, giving them a second skin of stone. This new skin mirrored what each of the prideful young musicians had become, twisted comical monsters formed from silent stone. Always aware, always watching.

As with all great tragedies, the survivors of the village rebuilt and strove to move forward. Romain, one of the survivors, became a leader of the remaining villagers, even repairing the old cathedral battered by the Veilstorm. He had the statues of the musicians moved onto the roof to serve as guardians, and turned the hall into a school.

During this time of relative peace, as storms passed over the school, the statues would gurgle or whistle as storm or rain assaulted them, and began to be called "gurglers." Over the years the children passed down this name, which eventually became "gargoyles." As time passed, the gargoyles slowly began to change, losing horns or wings, and slowly becoming new creatures.

During the second Malevolence, the choir children, knowing the power of the old building, ran to be with Romain. Unfortunately, the belief that the old strong building would be able to withstand the evil storm was unfounded. Great cracks began to form in the ground, with a child quickly lost the abyss. The guardians of the cathedral could do little more than watch as Romain struggled to save the children, urging them to climb the walls. As the storm raged on, shearing away half of the old cathedral, the broken and battered Romain pleaded with the storm to take him and spare the children. As the blood poured out of Romain, it began to be drawn into the stone. Romain had already closed his eyes, but was able to hear as he died the song that erupted from Goji and the rest of the gargoyles.

The gargoyles had awakened to protect the children, singing of everything they had seen and heard through the years. They sang the Song of the World. As the gargoyles sang, the last of Romain's blood drained from him, leaving him a statue. The song of the gargoyles was able to keep the storm at bay long enough to escape the crumbling cathedral. Goji and the rest of the newly awakened gargoyles returned the children to the villages before departing, letting the villages know that they should rebuild stronger and better. The only remains of Romain at the cathedral is a statue of a man in a protective stance, their new guardian. 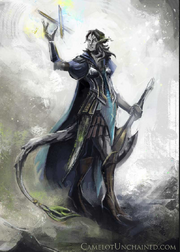 A Gargoyle Bard plying his craft

Gargoyles appear as stone-like humanoids. The features of their faces are usually angled and rigid, with pupil-less, all-white eyes and pointed ears. The epidermal layer of a Gargoyle is a mixture of a smooth hard rock-like flesh, seamlessly interwoven with tough scaled plates, commonly found along the neck region and appendages.

Their hands are clawed and stout, but incredibly adroit, enough to play musical instruments with mastery. Their legs end in large bird-like feet with two spiked toes. They have large thick tails with flared ends. Their hair is made of thick layers of the same material as their skin, forming fashionable patterns of swirls and waves.