Known as the Caretakers, the Fir Bog protect the bogs and swamps with giant-sized might, and as all Giants - they grow bigger and tougher over time. Dark secrets of their past lie deep down in the peat and moss, and each Fir Bog hides a deep mental connection to every other Caretaker. Reading the future in omens, they watch for danger to their Realm.

They are seers and mighty wardens of the wilds, secretive and powerful. The Fir Bog believe in preserving the deep mysteries of the Realm, and defending against all comers with great strength. Family ties are the strongest ties among the Fir Bog, and they ferociously defend their kith and kin. 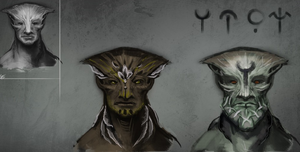 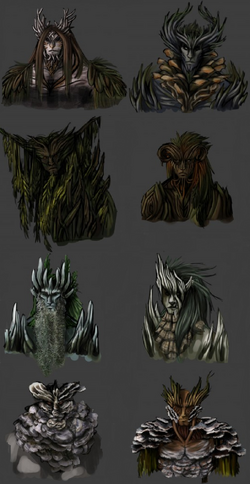 The Fir Bog gather to remember their past, with a mystical connection to the bogs where they tend to live. They come from a family that was persecuted for its ties to the throne, and saved itself in desperate straits.

The Fir Bog originate with the family of Eochaid, Teia, and Tiu their daughter. Eochaid was involved in politics, but had to flee when things turned sour. The family took up residence in the Móine Alúine, an ancient bog where some Luchorpán also lived. The family forged a deep connnection with nature, and was happy for a time.

However, one night a "blue moon" rose, a portent of calamity or great events that would become significant to the Fir Bog generations afterward. That night, Eochaid's political rival, Odbgen, ambushed them in the bog with a group of armed guards. He knocked out Teia, and sought to duel her husband Eochaid. In order to distract Eochaid, the villain mentioned that he had already caught his daughter, Tiu, and sank her in the bog with several dead Luchorpán. Filled with fear and rage, Eochaid used the storm that was brewing to his advantage, and managed to wound Odbgen and ran into the forest to save his daughter.

Having found the pond where she was drowning, he dove into the pool again and again, but found nothing, despite nearly drowning himself. The storm worsened into a Malevolence, and Eochaid cried out desperately, diving one last time into the dark pool, most likely to his death. However, he was changed by the storm into the first Fir Bog, and with his great size and familiarity with the bog he was able to find and save his daughter. They emerged, and went back to find Teia, his wife, all three becoming the first Fir Bog and giving birth to the race.

Enormous and powerful-looking, the Fir Bog giants have a plantlike appearance, very much in tune with the bogs they tend to call home. Their skin tends to range through browns and greens, while their hair is often their most plant-like feature. Their necks can be adorned with frills and leafy growths, and their eyes tend to be dark and deeply set. 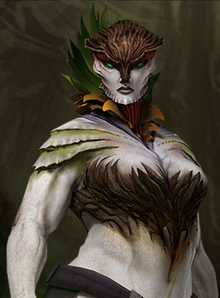