Camelot Unchained`s economy will be strongly based on crafting (no gear drops from NPCs [1]), with more accent on local markets (no auction house [2]). Fighters will be earning money from the Realm/king for their role and achievements in the war effort.  Looting & pillaging enemy structures will be possible [3],,[4] but there will be no player loot upon death.[5]

"I Still Hate Gold Sellers", the Foundational Principle #5, touches upon some standard aspects of the economy.

Game designer Ben Pielstick outlined the basics of Camelot Unchained`s economy in "Dose of Design" section of the Newsletter #6,[2] main points being:

Question: You are going for player driven economy, player driven world and story - sounds a little like EVE to me.. should we expect EVE like need for alts?

Question: If leveling is horizontal, will gear be also? Will there be requirements through leveling placed on gear to avoid "twinking" if it's not horizontal?

Mark Jacobs: Unless I was willing to go with a ton of BoP/BoE items (which I'm not), I think that there will be some twinking. OTOH, because items will be created more slowly than in traditional MMORPGs and we will have item decay and eventual breakage, it will be less of a problem (I hope).[7]

Question: With items not being lost on death and materials being salvageable from crafts, the sum total of material wealth will increase over time. How do you plan to prevent market bloat?

Mark Jacobs: Item decay is one way, another way is the fact that players will be spending money to repair/have things repaired after the mean, nasty other realms burn it down to the ground. :) One of the things to keep in mind is that by eliminating PvE, raids, etc. players will be generated less wealth & slower than they do in a game like WoW for example because the results of RvR will be a lot less predictable.[8]

Mark Jacobs (from the Foundational Principle #7): The creation and selling of items should be both a communal and open process to help encourage socialization and connectivity between the players and aid in the building of both Realm and server pride. While the current, auction house mechanic works very well in many MMORPGs (massive multiplayer online role playing games), it harms the sense of community that was present in many older games. 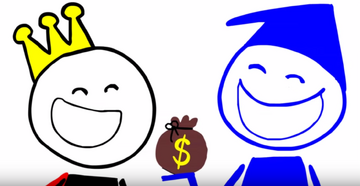 A scene from the Kickstarter Building Update video

While we will modernize the whole “sit around in the middle of town hawking our wares” thing, we will do so in a way that helps, not hinders, community building. While crafters should be able to sell their wares in a bazaar-like setting and/or through their stores we will also return to the concept of crafting stations in town. For your information, we might allow guilds that reach certain realm-based goals to have their own crafting stations in their guild manor but that is to be decided.[9]

Mark Jacobs (from the Foundational Principle #3): The addition of auction houses made it quite convenient for players to exchange goods. They have evolved over time from static locations with interactive auctioneers to, in some games, the ability for the player to buy and sell goods anywhere in the world. While this feature is quite popular (especially for pack rats like me), it has come at the cost of decreasing socialization between players and possibly, an increased sense of disconnection with the game as a world, rather than the world as a game. Again, a great feature for some games but in CU, we will have no auction house (though a commodities market *may* be an option due to the difference between gathered resources and crafted goods).

Instead, crafters will control shops that they can run themselves or they can barter their goods in parts of towns that we have customized and optimized for that specific purpose. Player shops are not innovative of course but they will be crucial in helping to build a larger sense of community among our players. CU will also have ways that players/guilds can group together in order to sell their goods but still with in-game merchants, rather than having to sell it by themselves.[10]

Renée Machyousky: Since there won’t be gear drops in our game,[1] all the gear must come from our crafters. They will have the ability to make really powerful, diverse and unique items. Those looking for a WoW (or even DAoC) style system where item bonuses are the key to success (and for the popularity of certain items) will find that this won’t be the case. Gear from our crafters will be useful, though not crucial, in helping the wearer. Mark has spoken about avoiding some of the typical MMO tropes when it comes to gear. He points out that gear is generally used by designers as a carrot to keep players playing (and paying). We won’t rely on such things in Camelot Unchained.[11]

Question: Will any items in the game be bind on pick-up or bind on equip?

Renée Machyousky: Bind on pick-up does not make good sense for our game given that all but the starter gear will be crafted, rather than dropped. Materials for crafting will not likely be BoP (bind on pick-up) as they will be a resource that can be traded/sold. Bind on equip may be used for some items, yet it is not meant to be a major part of the game’s item system.[12]