The combat system of Camelot Unchained is allowing players to build a vast number of their own abilities out of components, using the Ability Building System. Together with physics, collision detection and the A.I.R. System, this will make fights very tactically complex

Player`s skill progression / leveling up will also be direct consequence of fighting enemies from other Realms - you will progress through PvP, not through quests or killing monsters. Characters who die in battle won't get easily right back in the fight [1],[2], enemy structures can be looted/pillaged [3],[4] and destroyed but there will be no player corpse loot.[5] 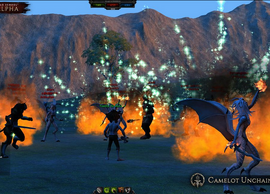 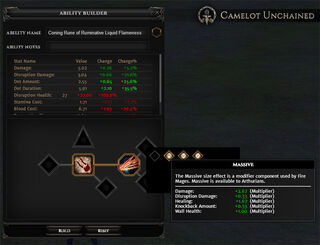 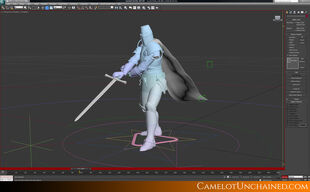 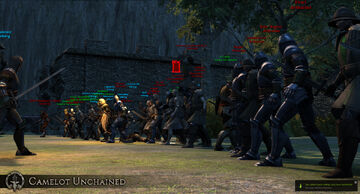 Question: It was previously mentioned that solo play should and will be a viable option in CU. How are you going to make it happen?

Renée Machyousky: Mark is a fan of solo play. So, while we can’t describe actual mechanics/details at present, I feel confident saying solo play will be a viable option for those who prefer that playstyle.[13]

Mark Jacobs: Is small group combat going to be useful in CU? Absolutely! And I also want this game to support solo play.[14]

Mark Jacobs: We are going to do everything from the design perspective to make buffboting almost impossible [14] (here Mark has in mind not banning IPs, but designing the game in such way to discourage buffbots, as explained earlier in the reference).

Renée Machyousky (answering the question about TTK - time to kill): "This is a rather loaded question and a lot factors into this. For instance, clearly some characters will be far more vulnerable (lower HP and resists) than others. I can at least say this, we are not over fond of insta-gibbing. We want battles to be hard fought, with plenty of give and take." [4]

Renée Machyousky: Some players may prefer to have two sets in PvP. These players should be prepared to experience a penalty (time/vulnerability) for swapping out weapon or gear sets while on the field of battle.[13]

Question: "...How are you going to break up the zergs that make RvR so much fun!"

Mark Jacobs (part of the answer, concerning combat): "...While having lots of extended CC abilities is a tad bit controversial, we will certainly have some CC (as well as resists and ways to clear the CC) so that smaller groups can have a better chance at dealing with larger groups." (...) "When you die, and you will die; don’t expect to simply pop back up and get right back in the fight. It is going to be a lot more complicated than that. IMO, that gameplay style embodies some of the problems with many modern MMOs, death without consequence, “easy in” and “easy out” RvR, 6-year old kids’ soccer match, etc. RvR combat must be fun, challenging, exciting and losing must hurt a bit or it means nothing." [1]

Ben Pielstick: "Our criticals are not a simple damage boost with a relatively high percentage chance, which probably happens several times in each fight. Our criticals are extremely rare, and a critical result isn’t always a good thing, since the table of possible results ranges from awesome successes to spectacular failures. As Mark pointed out in Foundational Principle #8, we want these occurrences to be “water cooler conversation” moments, and that just doesn’t happen for something you see several times a fight, or even several times a day." [16] 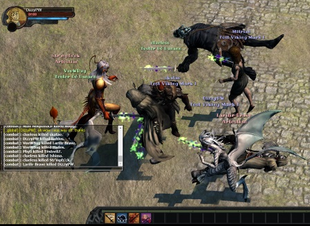 Mark Jacobs: "I also understand the concern of players who really don’t want too much randomness in their game because that can lead to far too many truly unexpected losses and frustration with the game’s mechanics, including the much maligned random number generator. What I propose is that this game’s combat systems have enough randomness built into them that players will not know that every time they swing their sword, they will always hit for X damage.

I don’t want the player to know that every time they go into a 1:1 battle with someone of equal knowledge/skill but with a slight lower character that the outcome is easily and thoroughly predetermined. However, the system’s damage combat mechanics will be laid out so that the majority of damage will be set but where only a portion of it is random but with a strong critical hit/miss system component as well. We should have a bit more fun with very rare rolls on both sides of the success spectrum. I want to add some special critical hits and critical failures to the game, as I believe that they will add a lot of spice as well as some much needed humor and occasional pathos to the game.

Critical hits & failures will be rare but every so often, something should happen of such monumental glory that the players end up discussing these as “water cooler conversations” the next day. Yes, it will not be fun to be on the receiving end of course but on the other hand, if you are on the other side or simply enjoy a good chuckle, your seeing that powerful Tuatha Dé Danann mage cast a mighty spell and being turned into a horned rabbit might make your day. Again, I don’t want to turn this game into an evening’s worth of blooper reel entertainment but a little randomness could add some truly awesome moments into the game or as my son would say making it “fresh.” " [17]