Camelot Unchained is a TriRealm, RvR-focused MMORPG from City State Entertainment. Camelot Unchained is one of the top ten most successful Kickstarter game projects, and continues to raise funds through its official website, having recently broken $3.5 million in crowdfunding thus reaching over $6.6 million of total budget.[1],[2]

Currently in the late Alpha testing, the game is in development, slated for full release in 2016. The game will be a subscription-based, focused on massive battles between three factions, each with its own lore and legends.

The game will feature RvR-based, horizontal leveling tracks for all classes. PvE (player vs environment) including some big monsters will also be there, just without PvE based leveling and gear drops from bosses. All leveling and gear will come from engaging in the game’s RvR-based systems, whether by fighting other players, capturing or even destroying objectives, and/or crafting, building & mining to help your Realm in the great war.

Economy and infrastructure will be crucial for the war effort: crafters,builders and miners will have their own, 100% dedicated class

"Your epic story does not require you to raid a dungeon day after day, hoping the right item will drop if you kill enough bosses: your story begins with survival. All the world was almost wiped out when the Veilstorms tore across the land, changing and breaking it apart. You live on, to rebuild and conquer what remains.

In Camelot Unchained, a player-driven economy of shops and bazaars brings you into the immersive world. There are no real-world money shops for your hero to take the easy path. You must consult a master craftsman, who can create items as powerful as the harsh RvR world demands. You must win your Realm’s trust, and earn the right to wield a mighty blade by equally mighty deeds. Drawing on ancient folklore from Arthur to Yggdrasil, the world is alive with strange creatures and stranger folk to meet; but your story rarely includes treasure simply found by the roadside." 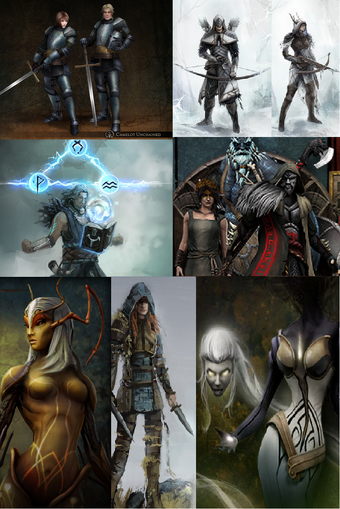 Corresponding classes of each Realm will be far from identical

Our RvR game puts the power of choice in your hands. Camelot Unchained never tries to monetize you, never slows down, and won’t be “free-to-play.” We respect your commitment to a subscription-based game; in return, you won’t see thinly-veiled grabs for more money. Everything you need to succeed in Camelot Unchained requires skill and effort, not an open wallet. You will see your choices change your fate.

Camelot Unchained is not just about the battle between three Realms; it is a world filled with rich lore ancient yet written anew. While dungeon raids are not part of your daily ritual, you can fall deep into The Depths™, a creation from the mind of studio co-founder Mark Jacobs, which draws inspiration from the mythos of H.R. Giger and H.P. Lovecraft. It is a truly twisted place, a dark abyss that lives and breathes evil. If you dare to explore, know this: even after death, a player’s soul can haunt and hunt other adventurers.

Here’s where co-founder Andrew Meggs works his magic. If the world didn’t run well, RvR would mean small-scale battles, and even those battles would look like stuttering slideshows on anything other than top-of-the-line gaming systems. We are building our own engine, designed to handle the demands of Camelot Unchained’s epic RvR.

Andrew’s primary focus is on the size and speed of battle, so the three mighty Realms can fight in a vast, open world with RvR conflict to match. This game won’t be instanced, it won’t have oversized weapons or pauldrons, and we’re not into the “One server to rule them all!” thing. Instead, expect old-school servers, where you can take pride in your Realm and your war-torn world.

Over the coming months of development, anyone who chooses to become a Backer will see the impact of our efforts to build our tech the right way.We are building a game and engine from the foundation upwards.

While that means we aren’t as focused on refined graphics, we’ve created a whole lot of interesting, useful, and unique tech. That’s what is truly important to us: that the game works well. That’s how we repay the trust shown to us by our Backers: We do things the right way from the start. Build the world you believe in, fight for supremacy, and support Camelot Unchained!

The video below is The Opposition Podcast with Mark Jacobs, touching upon a wide range of aspects of Camelot Unchained; here (the first post in that thread) is the list of topics, in order in which they appear in the video.

Question (about Camelot Unchained): When the game launches, how will you measure success? Will it be a certain number of subscribers? Player or critical acclaim?

Mark Jacobs: 30-50K subs and 80+ on Metacritic would be great. We know we will have to cut corners with certain things that might hurt our scores with some critics - like musical score, trailers and interstitials (never liked them anyways). However, I hope that they will see the game for what it is and not for what it isn’t due to smaller budget, independent development, etc. - like many did with Dark Age of Camelot.[3]

This article is a stub. You can help Camelot Unchained Wiki by expanding it.