The Bean Sidhe (Banshee) are a ghostly race, who float rather than walk upon the earth, and whose heads often hover above their bodies. They are mournful creatures, born of terrible tragedy in the lands of the Tuatha Dé Danann. It is said their keening songs call to the soul of suffering in the world, and their power over sound is unmatched.

Haunting and mysterious, the Bean Sidhe seek to bring justice to an unjust world, and make the hearts of their enemies bleed with despair. Their powers are challenging to wield, but a greater challenge to face. Even a soul is not too great a price to pay to avenge injustice. 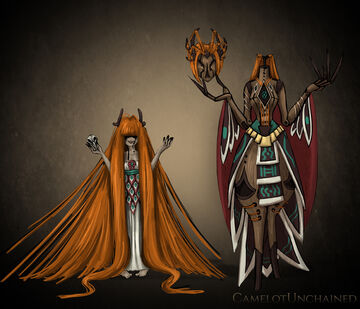 The Bean Sidhe come from those who have been horrifyingly tortured for an unjust cause. They have a tradition connected to music and dancing, and it is bound up with both good and bad for them. They are vengeful, yet fully capable of empathy for their allies.

The Bean Sidhe originate with a graceful dancer called Badhbh, who fell in love with a singer that didn't deserve it, called Donn. After they were married, Donn grew jealous and insane. Badhbh finally gave up trying to reason with him and tried to leave, but was physically confronted by her husband. She struck him and ran to a neighbor's house, where Donn eventually found her.

Assuming that his erroneous suspicious were confirmed by her presence there, he overcame both her and the neighbor, and brought them out into the woods to torture. The neighbor died, but Donn kept Badhbh alive, despite cutting off her feet and gouging out her tongue. He then left the town.

Badhbh survived, but only barely, her desire for vengeance growing. Eventually, the town was hit by a Malevolence that reacted with her despair and hatred and transformed her into the first Bean Sidhe. She then journeyed to find Donn and wreaked horrifying vengeance upon him. Afterward, she took to wandering the Tuatha Dé Danann Realm, seeking for others and beginning the race of the Bean Sidhe. 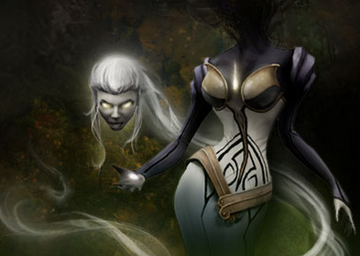 Bean Sidhe often appear as floating apparitions of contrasting shades of black, grey and white. In some cases, shadowy tendrils flare out of where their legs and head should be, with the only color coming from a glowing marks on their upper torso and palms.

Sometimes their heads float about their bodies, with glowing wisps coming from their eyes and mouth - a hint of the terrible power that could be unleashed if crossed.

Additionally, below is the list of Tuatha Dé Danann Realm Banes and Boons: 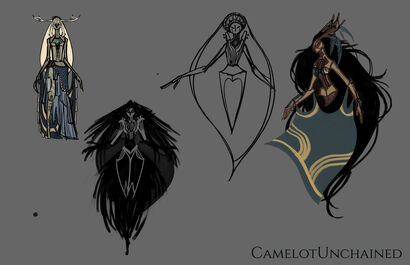